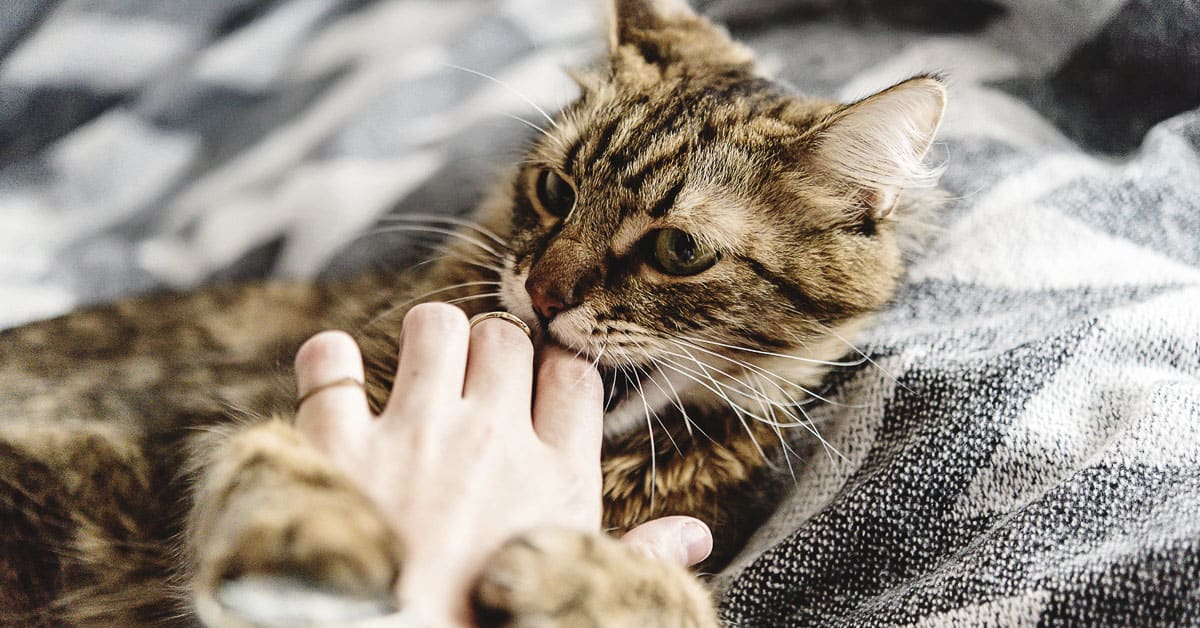 As a cat owner, you’ve been in this situation plenty of times: you’re petting your purring, content cat absent-mindedly when all of a sudden you get nipped! Cats can bite for various reasons, but what are cat love bites?

Cat love bites happen during petting sessions, and cats use them to signal you that it’s time to stop the interaction. These bites typically aren’t too intense and they don’t draw blood, but unsuspecting pet owners may wonder what caused the sudden change in their cat’s behavior.

What are cat love bites?

Despite the name, cat love bites have nothing to do with affection – another term for this feline phenomenon is petting-induced aggression. This type of behavior occurs while you’re stroking your cat and it’s a sign that your furry friend isn’t enjoying the interaction anymore.

Once the petting becomes irritable, your cat is likely to nip you and then run away. It’s their way of saying that the strokes felt good for a while, but now they’ve become unpleasant and you should stop.

Normally, cat love bites are pretty light and they don’t break the skin. They may start with licking you, and as the petting intensifies, you may feel your cat’s teeth on your skin. It’s interesting to note that this type of aggression is more common for males than female cats. 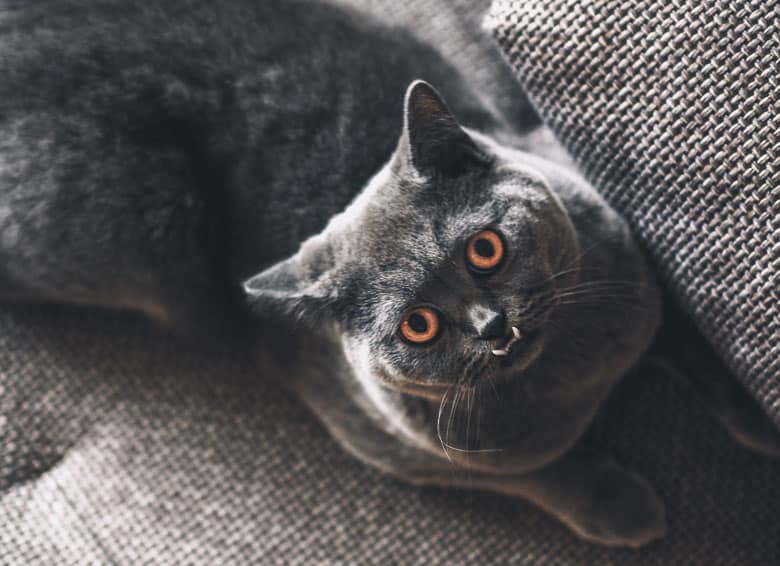 Communication signs to look out for

It’s important to monitor your cat’s body language during petting sessions, as they will signal you when they’ve had enough before they resort to biting. Here are some of the communication signals to look out for:

Why does my cat bite me gently?

The reason behind petting-induced aggression is still very much a mystery, and there isn’t much scientific research on why this type of behavior occurs. However, experts believe that physical contact, such as petting can become unpleasant for cats if repeated over and over again.

Such overstimulation can cause excitement, arousal, and pain in cats, and it can even lead to the creation of static electricity in your cat’s fur.

The gentle biting of cats can also be unintentional, done as a part of the grooming process. This can happen when your cat decides to groom your hand or face.

Another reason for cats nipping their owners could be that they have overly sensitive skin. Some cats suffer from hyperesthesia, which is an increased sensitivity in an area of a cat’s skin. This area is typically on the back or in front of the cat’s tail, so it’s best to avoid them during petting sessions, or the experience can be extremely uncomfortable and painful for a cat. Also, cats with hyperesthesia may be perfectly content just sitting in your lap, without being stroked.

Cats will also nip at their pet parents’ legs if they are feeling impatient about being fed or played with. For example, our own cat Bobo will nip at ankles and calves if he’s feeling ignored and wants someone to play with him. Another staff kitty nips at her parent’s legs when she’s ready for breakfast. 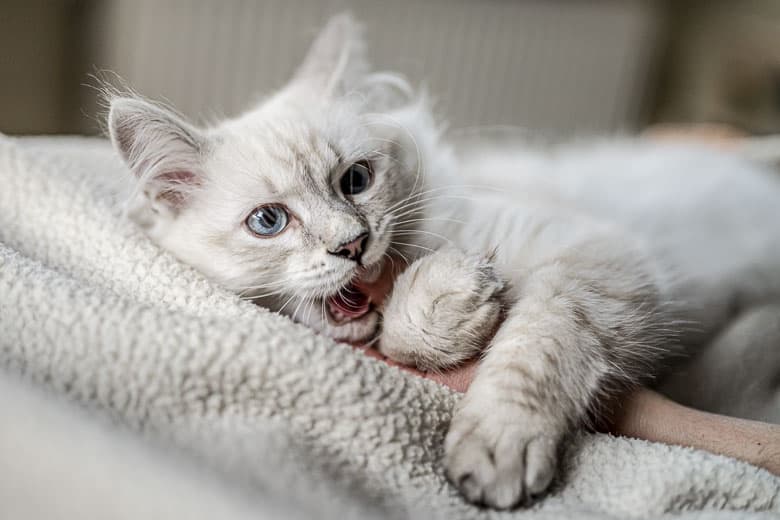 Cat love bites shouldn’t be confused with highly aggressive biting that could stem from fear, defensiveness, or a desire for cats to mark their territory. There are different types of aggressive behavior in cats, all of which are preceded by certain warning signs.

Cats can become aggressive if they perceive something or someone as a threat they can’t escape. The more afraid they are, the more intense their reaction will be. You can spot this type of aggression by observing your cat’s behavior – they’ll show a mixture of aggressive and defensive signs, such as hissing, scratching, and biting, but also leaning away, rolling onto their side, or tucking their tail.

It’s in the cats’ nature to act territorially and keep out intruders. This type of behavior can be directed towards other cats, but also dogs and people. Cats mark their territory by urine spraying, patrolling, and chin rubbing. They can display territorial aggression by stalking and chasing undesired individuals while hissing and growling.

Cats can become territorially aggressive when a cat is introduced to a newly adopted cat or when there’s a big change in their living environment, such as moving to a different home.

When a cat is agitated by another animal or person and they can’t get to them (for example, they see a roaming cat outside the window), they will direct their aggression towards the nearest person or animal that approaches them.

There can be a delay between the initial trigger and the actual display of aggressive behavior, which is why it seems so sudden when it happens.

Cats can become aggressive if they’re in pain and someone touches them. It’s important that cats with aggression issues are examined by vets, as there can be underlying medical problems that are responsible for aggressive outbursts, such as dental pain and arthritis.

Cat love bites shouldn’t be mistaken for misdirected play behavior. This type of behavior often occurs in cats that are under two years of age and spend a lot of time alone at home. They may see their owners as prey and engage in predatory play behavior. This involves your cat stalking and chasing you and may result in you getting bitten when you reach out to pet them. 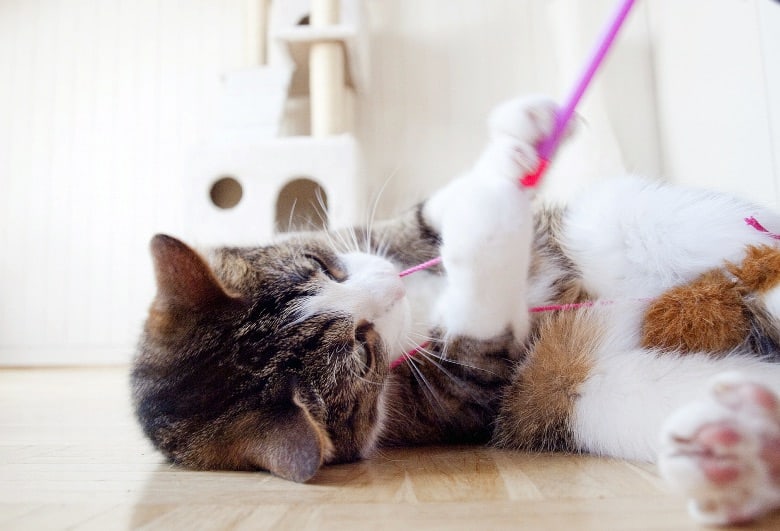 To establish some ground rules when it comes to appropriate home behavior, it’s best not to use your hands for any type of play. Instead, you can use laser pointers, toys made of soft material, or wands with attached strings. Be sure to give your cat enough playtime every day to keep them entertained and point their energy in the right direction.

Should you stop your cat from giving you love bites?

Cats will only give you love bites as a response to excessive petting. Once you stop the undesired interaction, your cat will stop nipping you.

How to appropriately respond to cat love bites?

It’s important not to react abruptly if your cat bites you, as this can only frighten them and encourage even more aggressive behavior. Refrain from shaking or grabbing your pet by the scruff of their neck. If the bite breaks the skin, be sure to wash the wound right away. Keep an eye on any redness, swelling, and if you notice they’re spreading, schedule a visit to the doctor.

It’s also important to monitor your cat’s behavior to be able to prevent love bites in the first place. Cats communicate in various ways, and if you notice any sign of discomfort, stop the petting immediately to avoid getting bitten.

How to properly pet cats?

Some cats like petting, others are not fans. If your cat doesn’t like being petted keep petting sessions short, with frequent breaks to sustain their interest. Also, it’s always a good idea to invite your cat to a petting session rather than startle them while they’re resting or sleeping.

Some cats prefer gentle scratching of their chin or head to long strokes on the back. It’s always best to avoid potentially sensitive areas like their bellies or areas near the tail. Also, always pet your cat in the direction of the fur growth, and pay attention to their body language to be able to prevent love bites.

Love bites aren’t displays of affection, but rather a type of aggressive behavior caused by excessive petting that’s quite common in cats. Although there isn’t much research on this subject, experts suggest that the cause of love bites lies in overstimulation, which you can prevent by understanding your cat’s body language and stopping the interaction when they’ve had enough.

It’s important to avoid negative responses to your cat giving you love bites, as this can only make them more aggressive. By keeping the petting sessions brief and keeping an eye on potential signs of discomfort, you’ll be able to prevent undesired behaviors.