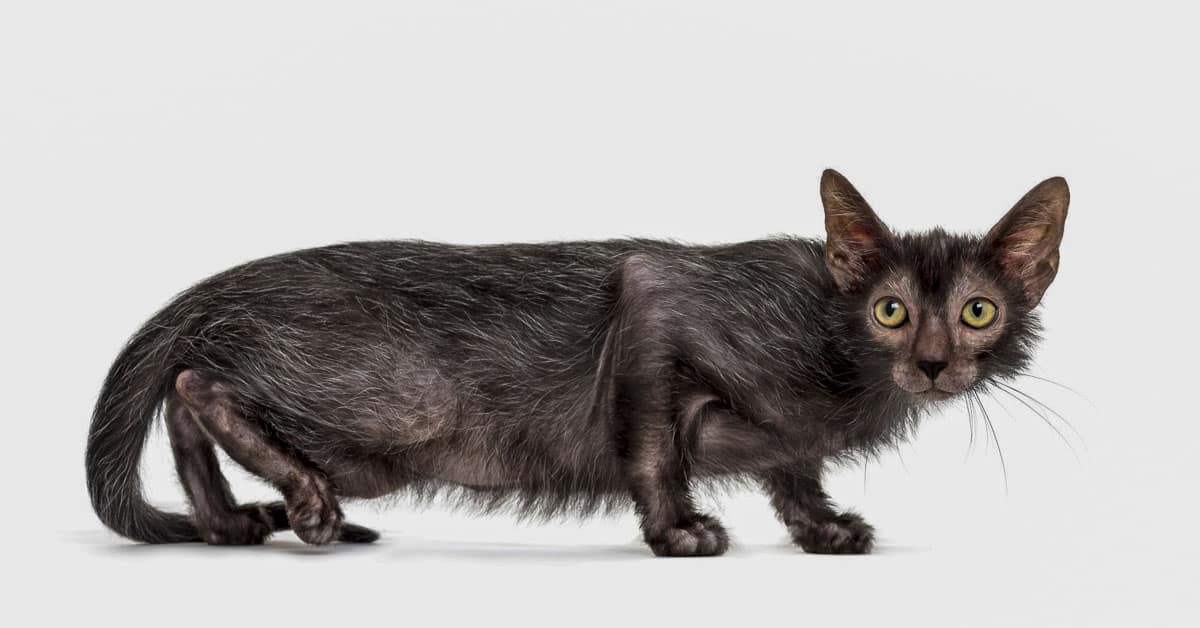 Lykoi cats are a fascinating new breed introduced in 2011.

These cats are living, breathing wolf cats, or more like werewolf cats. They’re the result of a naturally occurring mutation found in shorthairs. The mutation causes interruptions in hair growth, giving the Lykoi cat breed a patchy, werewolf-like coat.

Brittney and Johnny Gobble founded the breed, and it is now recognized by The International Cat Association (TICA).

Here’s everything you need to know from Lykoi kittens to how much one costs and how to care for them.

What is a Lykoi Cat?

If you’re an avid cat lover, you’ve probably heard about the Lykoi cat. This kitty is quite unusual, which is perhaps how it got its werewolf nickname.

Despite the werewolf association, these cats aren’t an ancient breed. The Lykoi only resembles the werewolves in fables and spooky stories, hence its nickname. ‘Lykoi’ is derived from the Greek word for werewolf: ‘lycanthrope.’

Interestingly, the mutation that gives the Lykoi cat it’s distinct appearance has been circulating in domestic cats for over 20 years. Experts have carried out DNA tests on the cats and have proved that the appearance doesn’t stem from a relation to the Sphynx or Devon Rex genes.

It’s a natural genetic mutation from a domestic shorthair cat.

The Lykoi name roughly translates to “wolf,” which is a tribute to its unique appearance.

Lykoi originates from a Greek myth. According to the story, a man named Lycaon tricked Zeus into committing cannibalism. To punish him, Zeus turned him into a wolf.

In 2010 in Virginia, Patti Thomas found two shorthairs. Both were carrying the mutated gene and the unusual appearance.

A year later, in 2011, a veterinarian named Johnny Gobble found another pair. The Gobbles used cats from two unrelated litters to begin the breed line. The cats were tested to ensure that they both carried the same mutation and ruled out the possibility that their appearance was due to their genetic codes containing any DNA from either Sphynx or Devon cats.

Before beginning the breeding program, Gobble ran tests on the cats to determine whether their scraggly coats were a byproduct of disease or other underlying conditions. They were deemed healthy. Patti Thomas gave her kittens to Gobble, and a breeding program debuted.

How are Lykoi cats bred today?

To expand the Lykoi cat breed, the Gobbles pair them with domestic black cats since they carry a similar gene. This is also why most are dark with black fur.

Besides breeding Lykois through black cats, the Gobbles bred rescued feral cats. They often have a diverse gene pool, which may benefit the Lykoi cat breed.

In 2012, the Lykoi cat went before TICA and was promptly passed to “Registration Only” status. Lykoi is now a recognized championship breed. They can compete against others.

Currently, breeders are working on expanding the Lykoi breeding program.

Lykoi cats are born without an undercoat, and most never grow hair around the eyes, nose, and toes.

Honi The Lykoi Cat aka Wolf Cat or Werecat
Watch this video on YouTube.

Lykoi cats are quite active and playful, often chasing toys and even other pets. They’d rather run around than sit on someone’s lap all day.

Given their feral cat genetics, they have powerful prey drives.

Lykois may be cautious of new pets, so a slow transition will be necessary. You should consider the breed and their temperament before bringing home a second feline friend.

Lykoi cats are surprisingly cuddly. Despite their playful nature, they don’t mind daily snuggles with their pet parents.

Lykois have dog-like personalities. These kitties seem to share a few personality traits with their canine counterparts. If you live with more than one Lykoi, they often come together to hunt in packs. They may even wag their tails when excited.

Are Lykoi cats healthy? Lykoi cats are a relatively new breed, and experts aren’t sure about their full lifespan. Estimates indicate that a healthy Lykoi can live up to 20 years when well cared for.

There are always possible health problems with new breeds. So, if you get a Lykoi kitten, have a vet monitor them closely. Also, be sure to opt for feeding them high-quality cat food.

Grooming and taking care of your Lykoi cat

Despite their coarse fur, they shed a lot. Excessive shedding can result in partial baldness.

Lykoi kitties also molt. When this happens, they may lose all their fur, making them look similar to the Sphynx cat. Fortunately, molting is seasonal and may only occur twice a year.

Lykoi cats aren’t hypoallergenic. If you have kids or other people in your home with cat allergies, this may not be the best cat breed for you.

Due to their sparse coat, oil tends to accumulate in their ears and claws. Excessive oil can also be a sign of an underlying condition, so check in with your vet. Check with your vet and clean your cat’s ears and claws regularly with a safe cleaner.

This is an indoor-only breed. Their thin coats won’t protect them from cold temperatures.

To ensure they have sufficient enrichment while indoors, try to create a stimulating interactive environment. Make sure you have cat trees, perches, cat exercise wheels, exciting toys, and other items to keep them busy.

Werewolves living among us

The Lykoi cat is a relatively new breed. He has a distinctive appearance, and they don’t look like your typical housecat.

Despite the fuzzy appearance of this cat breed, Lykoi cats are quite pleasant. They’re energetic but can be loving when tempted with snuggles. That said, if you’re considering adding another cat, you should plan to introduce them to your new pet slowly.

Fortunately, health problems are rare, but werewolf kittens need close monitoring by a vet to ensure that they thrive. Consider providing high-quality kitten food for your Lykoi kitten.

1. How much does a Lykoi cat cost?

If you’re thinking about buying a Lykoi kitten, then be prepared. Werewolf kittens range between $1,500 to $2,500.

This breed is still rare. There aren’t many breeders despite the high demand, which can explain the high price.

Lykoi cats aren’t hypoallergenic. If you have kids or other people in your home with cat allergies, this may not be the best cat breed for you. You may want to consider one of our recommended hypoallergenic cat breeds.

3. Where can you buy Lykoi cats?

You can contact the Breed Committee Chair at the Cat Fanciers Association. It is essential to choose a reputable breeder who is careful to socialize their kittens as infants and throughout their developing first months to ensure a well-adjusted kitten and adult.