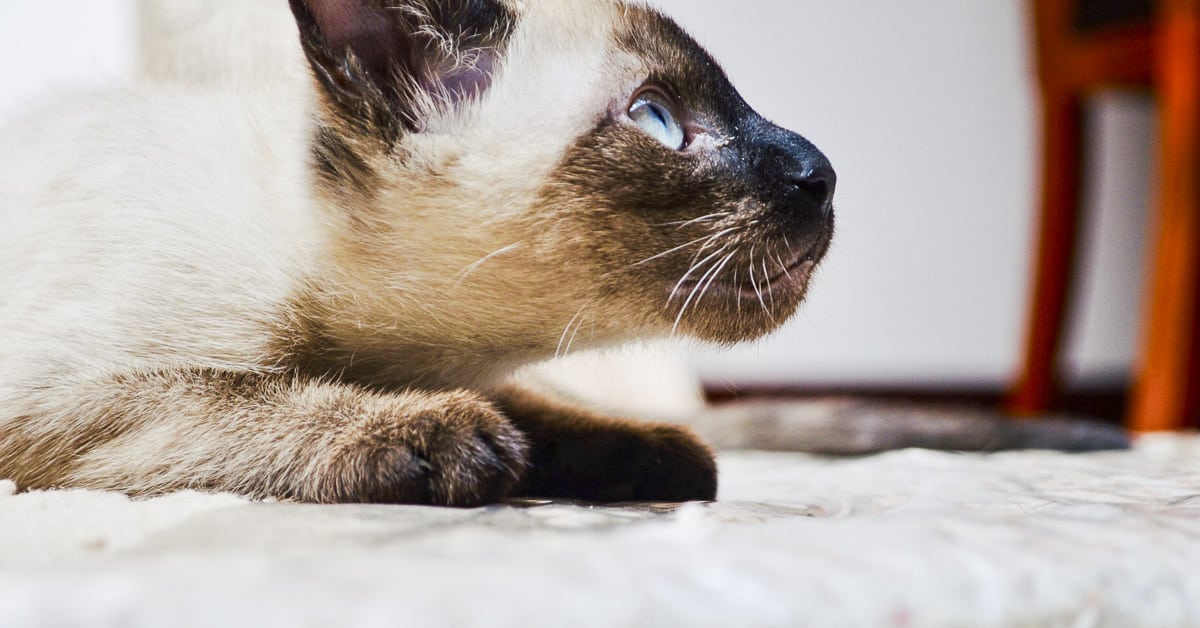 Elegant, gracious, and slightly mysterious, the Siamese cat has an iconic appearance known for its distinct chocolate and cream color points and deep sapphire blue eyes. Siamese cats are highly affectionate, vocal, easy-going, and love being around people, kids, and other animals.

Each point is rated on a scale of 1-5 with 5 being the highest score.

Siamese cats originated in Thailand, formerly known as Siam. The royal and noble families held these cats in such high regard it was believed that after death the soul of a family member entered the body of a Siamese cat. The Siamese cats we know and love are said to have descended from the sacred temple cats of the King of Siam.

Although there’s still debate about how old the breed actually is Siamese cats are depicted in ancient Thai manuscripts dating back to the 12th century. One of the manuscripts, titled “Cat Book Poems,” describes a pale-coated cat with a black mask, tail, feet, and ears. Sound familiar?

Beyond their Southeast Asia birthplace, the Siamese cat was first introduced in Europe in 1871 at the Crystal Palace Cat Show in London. Unfortunately, visitors were less than charmed, calling the Siamese “an unnatural, nightmare kind of cat.”

Seven years later, Siam, the first Siamese to come to America, arrived in 1878 as a gift for then-president Rutherford Hayes from the United States Consul in Bangkok.

One year later in 1879, The International Cat Association, or TICA, was formed, and the Siamese was recognized as one of the original breeds in the very first championship competition.

The Siamese is the parent breed for Oriental Shorthair and Longhair cats and the Balinese also known as a “longhaired Siamese”, as well as a genetic influence for other cat breeds, including the Himalayan, Burmese, Tonkinese, and Ocicat.

Siamese cats have a particular nickname in Thailand – wichien-maat, which means “moon diamond.” They’re also nicknamed “meezers” because of their tendency to be quite vocal. Siamese cats are well-known for their loud, low-pitched meows that are uncannily similar to a human baby crying.

Bob Dylan also mentioned a Siamese in his 1965 hit “Like a Rolling Stone” with the lyrics,“you used to ride on a chrome horse with your diplomat, who carried on his shoulder a Siamese cat…”

Siamese cats made it in showbiz on their own, too, by starring in the movies like Lady and the Tramp and That Darn Cat! As well as playing one of the key characters in the 1939 movie The Wizard of Oz, with Judy Garland’s Dorothy.

Siamese cats are highly affectionate and they bond with humans much as dogs do. You can expect your Siamese cat to climb into your lap as soon as you sit down. They will follow you around like a shadow to see what you’re up to and how they can be a part of it.

Siamese cats are attention seekers and thrive on interaction. They can get depressed if left alone for long periods of time, so they’re not the best choice if you spend the majority of the day away from home.

As a fan of warm and cozy places, a Siamese cat is likely to snuggle under the covers with you at night.

Siamese cats are very chatty and opinionated. They’re loud and tend to vocalize A LOT. You can expect lengthy “conversations” with them as they often expect their owners to respond.

Siamese cats are typically active and full of energy. They’re athletic and they love heights, so be sure to provide them with perches and cat trees. When left alone, they can also keep themselves occupied by opening cabinets or searching for hideaways.

Siamese cats are highly intelligent and can be easily trained. You can train them to walk with a harness and leash or play fetch with them. Quick learners by nature, you can use clicker training to teach them tricks, such as running an agility course.

Siamese cats are extremely playful and they require plenty of mental and physical stimulation to keep them occupied. They enjoy interacting with people on a regular basis, but they can also entertain themselves with toys and food puzzles.

A Siamese cat is a great choice for families of all ages, sizes, and types, as this fun-loving and affectionate breed, gets along great with kids.

Good with dogs (or other pets in general)

Siamese cats also get along well with cats, dogs, and other pets. As they crave attention and interaction, it’s a good idea to pair them with another playful furry companion to help point all that energy in the right direction.

Social, talkative, and outgoing, Siamese cats aren’t shy around people. They can be protective and territorial so they may not always get along well with strangers at first.

Siamese cats typically handle change well and can adapt to any situation. As long as you give them care, attention, and proper stimulation, they’ll be content anywhere.

The Siamese is a medium breed, with male cats weighing between 8 and 12 pounds, while females are smaller and normally weigh between 5 and 8 pounds. Siamese cats don’t reach full maturity until they are 18-24 months old.

A Siamese cat is slim, muscular, and strong, with long limbs and a long thin tail. They have wedge-shaped heads and long necks, which contribute to their sleek, gracious, and aristocratic appearance.

Siamese cats are instantly recognizable because of their distinct coloration. There are four Siamese colors, also known as “points”. The prototypical Siamese cat has a brown, or seal, point coloration. This appearance pairs a cream-colored body with a dark, almost black facial area and extremities.

The chocolate point combines an ivory body and legs, with a milk chocolate-colored tail, face, and ears. The blue point has a silver body with a greyish-blue face and limbs. The rarest variation is the lilac point. This uncommon coat color features a light, white body with soft and muted pink-gray tones on the face and extremities.

Siamese cats have short coats, which only emphasize their color points and make them appear more striking.

Since they have short and silky fur without any undercoat, Siamese cats don’t shed a lot. In fact, they’re considered by many to be a hypoallergenic cat breed. They require very little grooming maintenance and rarely experience hairballs. 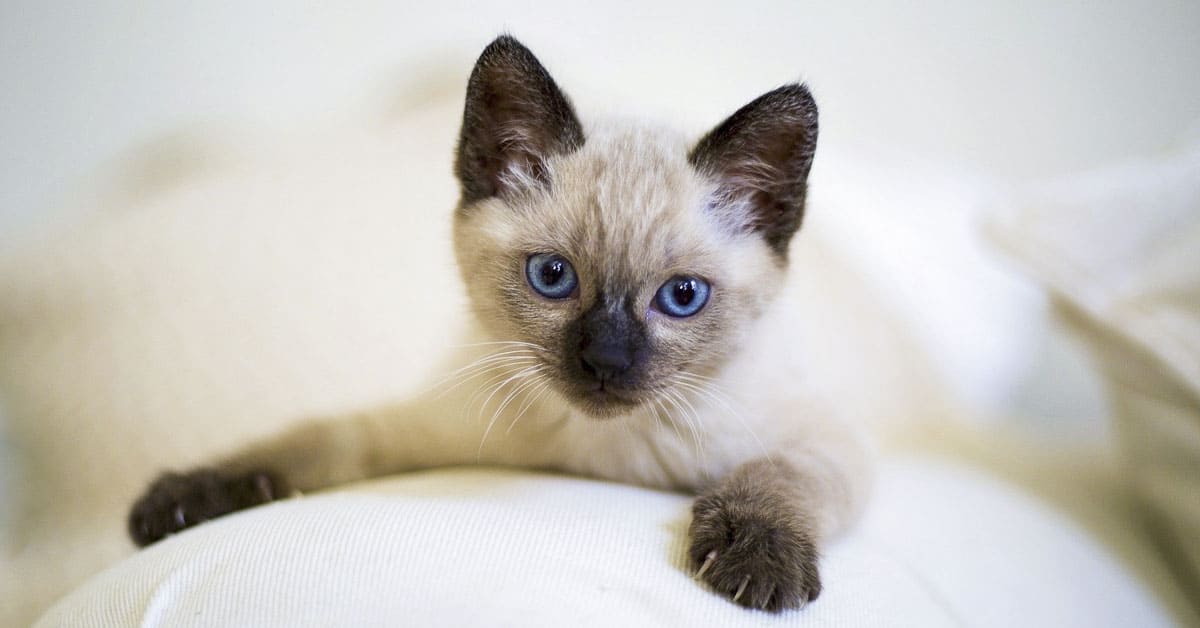 Another recognizable trait of the Siamese cat is their piercing almond-shaped sapphire blue eyes. Together with large, triangular ears, these eyes contribute to the signature elegant look of the Siamese.

Siamese cats are prone to obesity, so it’s necessary to monitor their food intake, especially if they use treat dispensers often. Experts recommend feeding adult Siamese cats twice a day. Kittens should be fed more often, 3 or 4 times a day, as they burn calories faster than adults and require more nutrients for healthy growth and development.

As with all cats, a high-protein diet is essential, and for Siamese cats, low-carb cat food is a good choice. Canned wet cat food is a preferred choice by veterinarians as it contains more moisture and fewer carbohydrates than dry food.

Siamese cats can adapt to any environment. Their relatively small size makes them ideal for life in less spacious houses and apartments. Bear in mind they tend to be quite loud and vocal, so have a plan in place for if they catch the attention of your neighbors.

Siamese cats are excellent jumpers, so if you live in a house, make sure to have a secured fence in the yard, as they can easily climb a fence and escape.

Because of their short, single coats, Siamese cats are sensitive to cold temperatures. They prefer warm places, so make sure that you have many cozy places for them to retreat to and settle in.

Siamese cats are susceptible to developing amyloidosis, a liver disease, and several types of tumors, including intestinal cancer, lymphoma, and mammary gland tumors.

Reputable Siamese breeders will have the kittens screened for health issues, but it’s important to continue screening them regularly into adulthood, as some diseases can manifest later in life.

The same gene that’s responsible for colorpoints in Siamese cats is the cause of the breed’s vision issues. Siamese cats have poorer vision compared to other breeds, which is something to take into account if they’re outside after dark.

Siamese cats are also sensitive to anesthesia, so it’s necessary to inform your vet about this before any type of surgery is performed, including routine ones.

Since Siamese cats have short and silky single-layer coats, they shed very little. They’re not high-maintenance in terms of grooming but they benefit from regular brushing, especially as a bonding activity.

It’s necessary to trim Siamese cats’ nails once a week, as well as clean their eyes and ears. When cleaning their ears, always use a warm, damp cloth, gauze, or cotton balls.

Siamese cats are known to live longer than other cat breeds. Their average life expectancy is between 15 and 20 years. A Siamese cat named Scooter, who died at age 30, holds the record as the world’s oldest male cat.

Where to Adopt a Siamese cat

Here’s where you can adopt a Siamese cat: 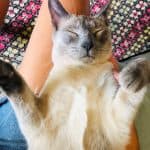 Austin Siamese Rescue is a non-profit organization committed to the responsible rescue, rehabilitation, and rehoming of Siamese cats in the Central Texas area. They focus on the 14 breeds of the Royal Thai Family. Bobo, our site mascot, was adopted from ASR. 🙂

Siamese Cat Rescue Center is a nationwide network of rescues that foster Siamese cats and kittens from shelters before they are euthanized, saving over 25,000 felines so far. There are several chapters of this organization, including the ones in Virginia, Colorado, and California.