If you own more than one cat, you may have noticed that our feline friends tend to turn grooming into a collective experience. But why do cats lick each other?

The most apparent reason for cats licking each other is to maintain good hygiene, but there’s more to it than just clean looks. Scientific studies have shown that cats groom each other to strengthen the bonds between them and establish the dominance of higher ranking cats over lower-ranking ones.

Domestic cats aren’t the only ones that participate in social grooming. This type of behavior is social behavior of cats in free-roaming colonies and it has the same purpose of social bonding and reinforcing hierarchy in groups.

In this article, we’re going to cover different reasons behind collective grooming among cats and the reasons why pet cats like to lick their owners, too. We’re also going to explain what over-grooming is and what you can do to stop it.

What does it mean when cats lick each other?

It’s common for cats that live together and have social contact to groom each other, as this could be understood as their way of enhancing social bonds. Also, mother cats normally lick their kittens to keep them clean and comfortable during the first few months of age.

Mutual grooming can also be related to a higher rank and establishing dominance in a social group. Some researchers claim that allogrooming can be a way for a cat to avoid being aggressive and establish hierarchy in a peaceful way.

Allogrooming is defined as the act in which one animal grooms the other. This type of behavior occurs between the members of the same species and it isn’t limited to cats alone. Primates, mammals, fish, birds, and insects all participate in mutual grooming.

The ancestors of house cats, the North African and Southwest Asian wildcats, weren’t prone to social interactions and they didn’t have distinct patterns of social behavior. Domestic cats are also solitary animals, but they are much more adaptable than their ancestors and capable of living in groups.

The best way to analyze allogrooming in cats is to observe feral cats that live in colonies. Although cats don’t have a pack mentality, they are likely to form small social groups around available sources of food.

In a study published in 2016, researchers from the University of Bristol found that allogrooming plays an important role in expressing cohesion in cat colonies, in addition to allorubbing and scent transfer.

A 2004 study that examined the social behavior of cats in free-roaming colonies showed that a new cat that isn’t a member of the colony is unlikely to participate in mutual grooming. In other words, felines engage in social grooming only with familiar individuals with whom they already share a social bond.

Why do cats lick each other’s heads?

Some cats approach other cats and ask to be groomed by exposing the back of their neck or the top of their head. This could mean they need help with cleaning those areas of the body since they can’t reach them on their own.

The same study from the University of Bristol found that cats who were being groomed felt very enthusiastic about it. They showed their eagerness by tilting their heads so that the groomer could have better access. Some cats purred during the process. 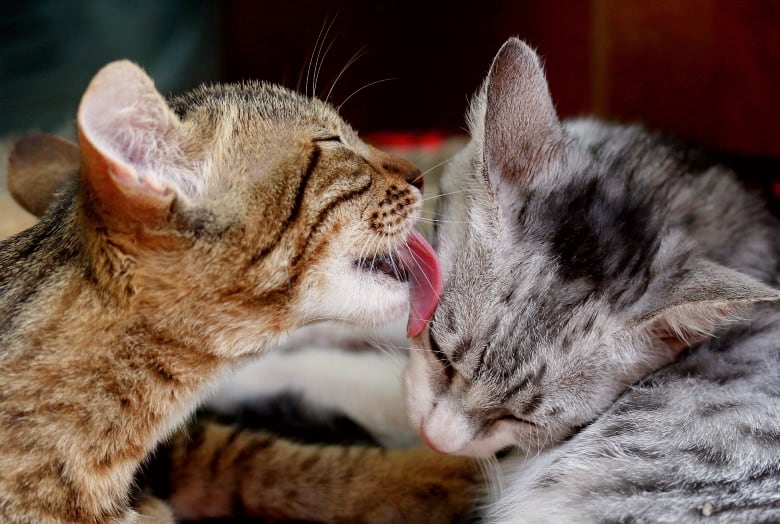 Social grooming can be related to establishing a hierarchy inside a group of domestic cats. A study published in 1998 involved observing grooming sessions of 25 cats, 14 males, and 11 females, and it reached some interesting conclusions.

In most cases, groomers were standing or sitting upright, while the recipients of grooming were sitting or lying. Also, grooming took place in one direction only, with one cat licking the other. Scientists hypothesized that such behavior could indicate an attempt of groomers to social behavior of cats in free-roaming colonies.

It’s interesting to note that the majority of grooming interactions occurred between two male cats. With males initiating grooming in over 90% of the cases.

The study also found that domestic cats that licked others behaved offensively more often than the ones being groomed. Groomers would often lick themselves after licking another cat.

Based on these findings, researchers believe that allogrooming could serve as a way to redirect aggressive behavior and avoid anyone getting hurt while maintaining dominance.

Since fighting each other would tamper with the group’s wellbeing, grooming interactions allow groomers to establish dominance without aggression, and at the same time, groomees avoid being attacked by the dominant cat.

Mother cats lick their kittens to clean them

Allogrooming is also done for health reasons. Mother cats, otherwise known as queens, start licking their kittens as soon as they are born. This eliminates any remaining placenta, stimulates the kittens’ breathing, and it helps remove liquid from their lungs.

Queens lick their kittens frequently to keep them clean and comfortable until they are approximately four months old. They also do it to stimulate urination and defecation. After that, the grooming sessions are likely to occur less regularly. 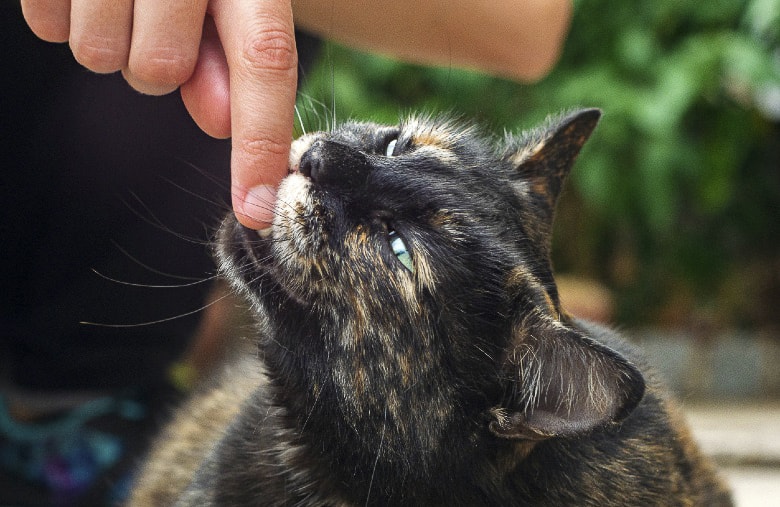 Why does my cat lick me?

In addition to licking each other, cats may enjoy licking their owners as well. Your cat may be licking you to get your attention, to show affection or because they want to play. They might also enjoy the taste of salt that naturally builds up on your skin.

Just like with allogrooming, your pet may lick you to show that you’re a part of their group and to enhance bonding. However, if the licking becomes excessive, it can be a sign of stress and anxiety. If that’s the case, consult your vet.

But being licked frequently by your cat isn’t always a pleasant experience because of the rough barbs on a cat’s tongue. If you want to prevent your cat from licking you, redirecting their attention by petting them.

Alternatively, you can try walking away whenever your cat starts licking you. That way they will associate the act of licking with you going away. Over time, your kitty will stop but you have to be consistent.

Cats enjoy licking themselves, other cats, random objects, and their owners, but this behavior can sometimes go beyond normal. Cats can obsessively self-groom for medical or psychological reasons. 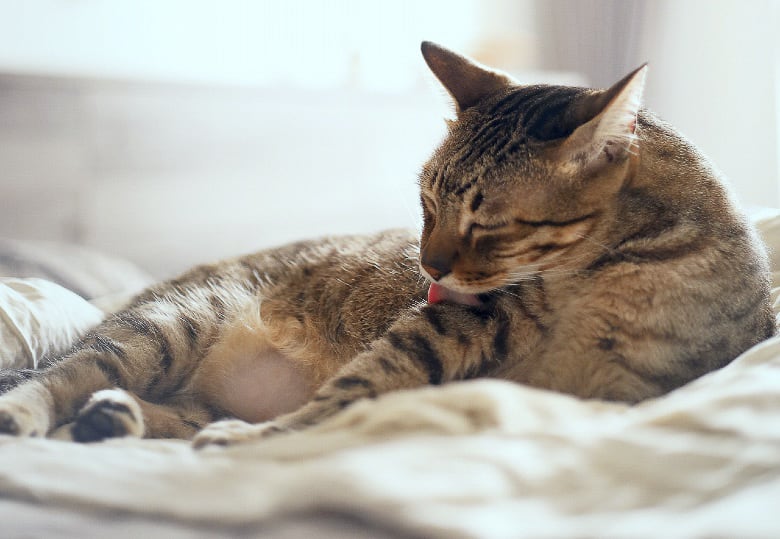 If you notice patches of broken hair across your cat’s body, or even complete hair loss and skin damage on certain areas, your cat is over-grooming. This may be a response to itching and pain caused by health issues such as allergy to flea saliva or lower urinary tract disease.

But the reason may also be psychological as cats tend to self-groom to feel better when they are feeling anxious and under stress. Some oriental cat breeds may even have a predisposition to develop stress-related excessive grooming problems.

Why do my cats lick each other and then fight?

Sometimes this turns into a playful wrestling match and sometimes it can lead to a quick scrap. This usually ends quickly. If you hear your cats hissing or yowling, step in and separate your cats.

Takeaways on why cats lick each other

Cat licks another cat for hygienic and social purposes. Allogrooming can serve as a way to strengthen social bonds between cats that are in close vicinity of one another, and it can be a way to reinforce dominance of higher-ranked felines.

Two cats groom each other for various reasons. Queens lick their kittens to keep them clean. Adult cats that are in the same group may groom each other to promote bonding and establish dominance without resorting to violent behavior.

Felines can extend social grooming to their owners to include them in their social group or get their attention.

However, cats can also develop excessive licking problems, especially when it comes to self-grooming. In such cases, it’s always best to ask the vet for advice